Who is sovereign in America? The Washington establishment that has isolated itself from the vox populi, or the American people?

Editor’s Note – This essay was originally published at American Mind.

Controversy about immigration in America is as old as the nation itself. The Declaration of Independence presents as one of the “Facts…submitted to a candid world” that “the present King of Great Britain” intends to establish “an absolute Tyranny over these States” because he has obstructed “Laws for Naturalization of Foreigners; refusing to pass others to encourage their migration hither.”

The Declaration had proclaimed that “the Laws of nature and of Nature’s God” entitled the American people to assume, “among the Powers of the earth,” a “separate and equal” sovereign nation. This nation would be based on the “consent of the governed” and dedicated to the proposition that “all men are created equal.” The clear message conveyed by the Declaration was that a sovereign nation-state has plenary power over matters of citizenship and immigration.

Today, left-liberals and progressives attack the nation-state as the source of almost every imaginable evil—war, racism, imperialism, ethnocentrism, white supremacy, and innumerable others. Against the nation-state are opposed such lofty ideals as multiculturalism, political correctness, open borders and the abolition of citizenship. If these ideals are not accepted, leftists riot, or threaten to. But the Left’s assault on America’s immigration policies is perhaps even more destructive than rioting.

The United States is attractive to immigrants and refugees from every corner of the world. In the election of 2016, immigration policy was a central political issue. Donald Trump promised to reduce the number of immigrants, stop illegal immigration, and restrict the flow of refugees. Though he made progress, he also faced tremendous opposition not only from Democrats, but from Republicans and the Washington establishment.

Democrats oppose restrictions on both legal and illegal immigration, in part because they presume that immigrants and refugees are likely to become future Democratic voters. Amnesty, with inevitable family reunion provisions, will add millions of new voters to the Democratic rolls. The main reason Republicans want increased immigration—particularly illegal immigration—is that it provides cheap and exploitable labor. Democrats have long-term political goals; Republicans seek short-term profits.

Since the Immigration Act of 1965, approximately 60 million people have moved to America, mostly from Third-World countries. These are immigrants who are more likely to seek the ministrations of the welfare bureaucracy and less willing to adopt the language, habits, and manners of the American way of life. The welfare bureaucracy encourages the retention of native culture, bilingual education, and a host of other programs that prevent or hinder integration. Indeed the old idea of the “melting pot” is now berated as a legacy of past “racism.”

Theodore White, the chronicler of the American political scene, lamented some years ago that “the Immigration Act of 1965 changed the future of America…. The new act of 1965 was noble, revolutionary—and probably the most thoughtless of the many acts of the Great Society.” Multiculturalism and identity politics began to replace the unity of the nation-state. The demographic change in the U.S. since 1965 has been momentous.

Illegal immigration is a problem that America’s elites are unwilling to address, even though public support for addressing this threat to the nation’s sovereignty has always been high. Even with increased resources devoted to border security, the southern border remains porous. Human smugglers move people across the border with near impunity, not only from Latin America and South America but from almost every part of the world: India, China, Syria, Iran, Africa. Some come seeking jobs, others to join families and relatives already in the U.S., many to engage in criminal activities, even acts of terrorism.

Criminal cartels also move large quantities of illegal drugs across the border into elaborate distribution networks that crisscross the nation. Crime from cartel turf battles spills over into American cities.

MS-13, a notorious Central American gang, operated more or less openly in the United States until just recently. Its specialties were murder for hire and smuggling drugs and people. MS13 succeeded in intimidating immigrant communities into compliance by terror and violence. It often engaged in open displays of the murder of young, mostly innocent victims, using machetes to hack them to death for maximum impact on those they wished to terrorize.

Gang members freely crossed the border, even posing as parents to bring children across and receive the benefits of refugee status. Members of MS-13 are protected by sanctuary cities, where their crimes are either ignored or excused. This is a situation that no sovereign nation should tolerate.

The willingness of illegal aliens to work for lower wages and to live in sub-standard conditions suppresses wages for American workers. Illegal alien workers are also exploitable; they are willing to work long hours, sometimes under dangerous conditions, for sub-standard pay. Complaints can be easily resolved by summarily firing the complainant who is without further recourse or threats of notifying immigration authorities. No American worker should be made to compete with such exploited labor.

Strong sanctions against employers who knowingly hire illegal aliens was a crucial part of the Immigration Reform and Control Act of 1986. But a coalition of progressive liberals and civil rights activists, allied with business lobbies, manufacturing associations, and agricultural groups, were successful in weakening the enforcement provisions so much that they were rendered unworkable.

The principal magnet for illegal aliens is jobs. Once jobs become unavailable, the magnet will no longer attract. Strong penalties for employers with vigorous enforcement will stop illegal immigration. But this policy is opposed by the Washington political establishment and the American corporate ruling class. David Jacobson, a keen observer and highly respected academic, points out that “the physically most powerful country in the world should be able to seal its borders against illegal entry.” But of course it is not a question of power. It is a question of political will.

Immigration policy should be designed to support the nation-state and the interests of Americans. Those invited to become members of the body politic should have something to offer to the common good—not only the capacity to adopt the habits and manners of republican citizens, but the wherewithal to be independent and resist relying on welfare and social services.

No one has a right to emigrate to the United States. Sovereign nations have plenary power to determine who enters the country and who can become citizens and who must remain aliens.

The American people clearly support policies that restrict and qualify immigration. Everyone can see the folly of the lottery visa program, which allots admission on the basis of racial and ethnic diversity. Its premise is that diversity is intrinsically good for the nation and should be encouraged. This dubious argument, however, no longer pertains to America, whose population is now thoroughly diverse, including people from and every nation in the world. Moreover, the country is now more divided than it has been since the Civil War, indicating that diversity per se is hardly “our greatest strength,” as we are so often told. Diversity rather tends to the dissolution of the common good and the promotion of identity-based tribalism of the kind that makes constitutional government impossible.

The Washington political establishment opposes the American public on immigration, and politicians have been notorious for failing to keep their promises on restricting immigration. Donald Trump listened to the people—and the ruling elites rebelled against him for doing so.

This raises a simple but profound question: Who is sovereign in America? The Washington establishment that has isolated itself from the vox populi, or the American people? America’s Founders created a nation-state based on the consent of the governed. This meant, above all, that the people are sovereign and that the ultimate expression of the people’s sovereignty is, according to the Declaration, the right of revolution. Elections are designed to replace revolution in the ordinary course of politics. But when elections are consistently ignored—or disrupted—the people have the ultimate right “to provide new Guards for their future security.” Surely it cannot come to that. From Subjects to Citizens, and Back 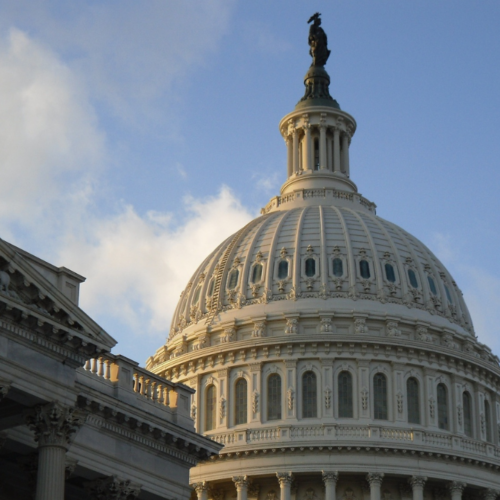